The use of robots to assist in the instrumentation of the spine is advancing at a rapid rate. Theoretical advantages include less radiation exposure and more accurate surgical results. The principles of robot-assisted spine surgery are introduced in this article, including those of the now commercially available Mazor X®. The challenges associated with robotic spine surgery await technological improvements and the results of ongoing studies. 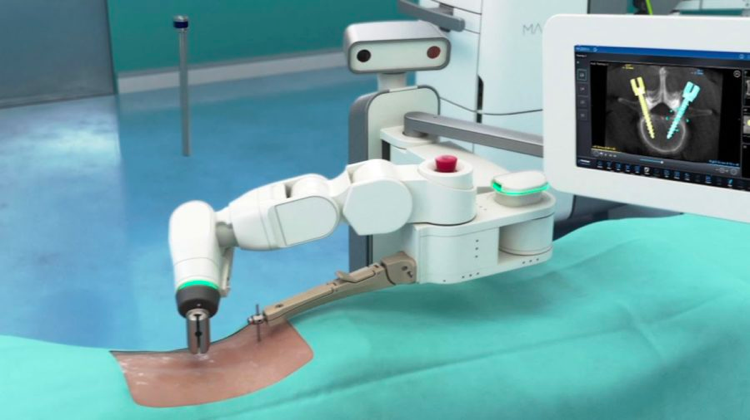 Robotic surgery has made significant clinical advancements in the past 25 years. First introduced in 1985, surgical robots have made inroads into the realms of general, cardiac, orthopedic, urologic, and spinal surgery. The increased use and development of this technology indicates that the use of robotics in spine surgery will only increase in the near future.

All robotic systems are based on the ability to use computer technology to fuse MRI and CT data to develop a virtual 3D image of the area of interest. The patient’s anatomy is then registered with the images, and a mechanical device (the robot) can then be programmed to localize particular details of the patient’s anatomy and perform resection of pathology, insert stabilizing screws, etc. during surgery without the physician’s hands ever directly touching the patient. This process can be performed remotely as well. Three conceptually different robotic systems have been developed:

Approximately 20 robotic surgical systems have been described in recent literature. Of these, 5 are in common use and commercially available. The Mazor X® is the latest version of a predecessor developed originally in 2004. It uses a computer workstation to preoperatively plan screw insertion while allowing for the acquisition of images intraoperatively as well as real-time control of the robot. Intraoperative 2D images obtained with fluoroscopy are merged with the preoperative CT scans and screw trajectories are planned. A robotic arm attached to a drill guide is then automatically moved into the appropriate position by the system to allow for drilling of the screw hole as planned preoperatively. With the Mazor X®, the robotic arm is independent and attaches directly to the patient via a pin.

The theoretical advantages of using a robot to perform instrumentation include:

However, as this represents a new technology, these claims remain to be substantiated in the scientific literature. Recent studies suggest accurate screw placement in the lumbar spine of 97-98% of patients compared to around 92% using freehand methods. In addition, the screws inserted by the robot resulted in less associated damage to the adjacent facet joints. Operative time was equivalent for both groups. Radiation exposure in robot-assisted studies is approximately 50% of that of traditional fluoroscopic insertion. It remains to be seen as to whether robotic screw insertion techniques are consistently accurate enough to permit application to the cervical spine. The DaVinci® robot system, widely used to perform prostate resections, has already been utilized in surgeries of the junction of the skull and cervical spine.

Challenges of robotic spine surgery include its considerable cost, lack of adequate studies, slower overall workflow, and a significant learning curve associated with its initial application. These challenges await ongoing studies and improvements.

Surgeries And Post Operative Care: What Do Patients Want?