Stereotactic radiosurgery refers to use of precisely focused radiation beams using a computer to accurately destroy tumor tissue with a minimum of damage to the surrounding normal tissues.

This amazing technology eliminates the need for actual surgery, anesthesia, pain, and blood loss. This outpatient procedure has been found to be safe and effective for metastatic tumors to the cervical spine. This article describes the concepts associated with stereotactic spinal radiosurgery (SSR), focusing on the Cyberknife®.

Ionizing radiation has long been used in healthcare for diagnosis and treatment of various diseases. At low doses, radiation is used for diagnostic purposes, such as in the x-rays of broken bones or the images generated by CT scans. However, in high doses, radiation can be used as a therapeutic measure to shrink and kill tumor cells in a delayed fashion, especially cancer cells that have metastasized throughout the body. The mechanism by which radiation kills cancer cells is primarily by damaging the DNA of the abnormal cells, preventing cell division; disruption of internal mechanisms of cell maintenance and growth; and by causing small blood vessels that supply the tumor to thrombose (block off), leading to starvation of the cells themselves. Unfortunately, in sufficient doses, ionizing radiation can damage normal cells as well, leading to similar events within normal cells and complications. Different tissues and organs have different tolerances to overall radiation doses; the key has always been to deliver the largest dose possible directly to the tumor cells while minimizing the radiation to the surrounding normal tissue. Unfortunately, the spinal cord is very sensitive to radiation-induced damage. In the past, radiation treatments were delivered by developing a “ field” of the body exposed to the radiation beams. This is analogous to throwing a bucket of paint to try to cover a particular portion of a wall; it may get some of the job done, but it is unfortunately not very accurate or economical. Stereotactic spinal radiosurgery (SSR) using the Cyberknife® is an outpatient procedure that uses these principles with the assistance of a computer to focus up to 1200 ionizing radiation beams exactly where they have the most effect (to the exact 3D geometry of the target tumor) while minimizing effect to normal adjacent tissue. It uses the images of CT and MRI which can be merged and then manipulated by the computer software to reconstruct a 3 dimensional image of the target tumor; we can then outline the target slice-by-slice on the computer to indicate the target volume to be treated and then create a plan of radiation delivery to that volume . This allows us to shape the beams and alter the intensity of the radiation delivered to create a conformal, intensity modulated plan that exactly conforms to the margins of the tumor itself. The stereotactic radiosurgery system acts like a 3D GPS system to localize the tumor anywhere within the body. The radiation plan is extremely accurate and precise; accuracy of 0.1 mm is quoted with modern day stereotactic systems such as the Cyberknife®. Treatments can be split up into a number of sessions (from 1 to 5, called hypofractionation) for added safety of the surrounding normal tissue. The treatments are performed as an outpatient; there is no pain; no need for anesthesia; no hospitalization; no incision and hence no bloodloss or risk of infection; and can be repeated in certain instances based on radiation dosage and time after initial treatment. In addition, as the treatment field is very precise, there is less risk of bone marrow suppression. Stereotactic radiosurgery systems now deliver ionizing radiation more like a fine DaVinci painting (addressing nuances of shape, location, and intensity) as opposed to that bucket of paint.

Approximately 70% of cancer patients develop metastases to the bones of the spine during the course of their disease, resulting in over 16,000 new cases of spinal metastases per year in the U.S. The overwhelming majority (greater than 90%) present with focal pain as their primary complaint, sometimes associated with tenderness and swelling as well as a new neurologic deficit such as weakness or numbness if the tumor results in spinal cord or nerve root compression. For some reason, the pain is more intense at night. In fact, new onset of back or neck pain in a patient with known cancer should be considered as secondary to metastatic disease unless proven otherwise.

Treatment of cervical spine metastases is focused on 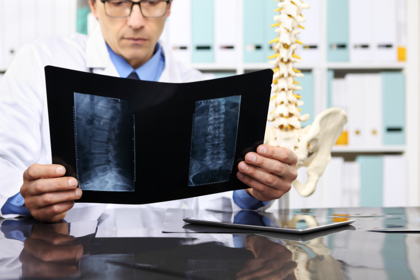 Treatment considerations should evaluate the risks and benefits of the combined effects of surgery, radiation (including radiosurgery), and chemotherapy. In a landmark study from 2005, an article by Patchell et al. revealed that patients who underwent modern surgical approaches to spinal column metastases (including anterior approaches and instrumentation) followed by radiation did much better than radiation alone. Ability to walk was preserved to a greater degree in the surgery + radiation group group (84%) versus radiation alone (57%). Subsequent studies have shown the effectiveness and safety of stereotactic spinal radiosurgery over conventional external beam radiation treatments.

In our practice, we prefer to provide SSR using the Cyberknife®. In addition to the planning computer and software, the ionizing radiation delivery system consists of a linear accelerator mounted to a robotic arm that moves around the patient to position the radiation beams in an infinite number of trajectories . If a beam is projected to pass through a radiation-sensitive structure such as the patient’s spinal cord or eye, a beam from that position is eliminated from the treatment protocol. Intersecting x-ray units built into the room automatically update the device in real-time as to patient positioning on the table and his or her spatial relationship to the radiation beams emitted by the linear accelerator. In addition, the device is able to compensate for body movements and organ shifting during the normal course of breathing as the patient lies on the treatment table. Depending on the complexity of the plan, treatments take 20 to 90 minutes. After treatment, the patient simply gets up from the treatment table and goes home – it is truly a Star Wars technologic advance!

Most metastatic tumors are amenable to treatment and can be from lung, breast, colon, prostate, etc. primary tumors. 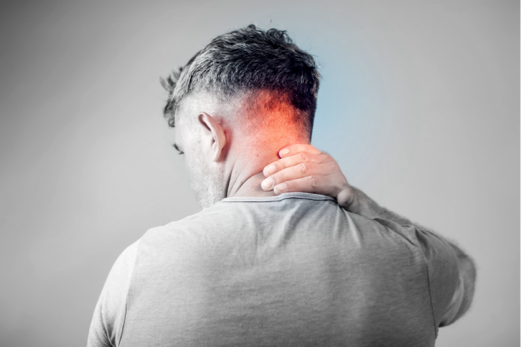 Complications associated with SSR are associated with the structures surrounding the spine that can be damaged by overexposure to radiation. This would include but not be limited to radiation-induced inflammation of the skin and esophagus; swallowing difficulties; soft tissue swelling (referred to as “edema”) caused by radiation effects resulting in neural compression; spinal cord involvement resulting in pain, weakness, paralysis, loss of sensation, bowel or bladder difficulties, and sexual difficulties; development of vertebral compression fractures; and the extremely rare development of secondary radiation-induced malignancies. The overall complication rate for SSR of the cervical spine is in the range of 2%.

In summary, stereotactic radiosurgery of the cervical spine has allowed us to treat increasingly complex metastatic tumors in medically compromised patients (especially those too sick to undergo major surgery) to improve length of survival and preserve neurologic function to improve overall quality of life. The Cyberknife® can provide a targeted high dose of ionizing radiation in one to a multiple of treatments in an extremely accurate, conformal, intensity modulated fashion to maximize the radiation dose to the tumor with a minimum of radiation spillover to the adjacent spinal cord and radiation-sensitive extraspinal structures. This results in a maximum effect with a minimization of complications for most patients with metastases to the cervical spine.

If you think that you or a loved one may be a candidate for stereotactic radiosurgery of the spine, please call us now at +1-(855)-854-9274. We would be happy to perform a free review of your CT and MRI studies.