Ossification Of The Posterior Longitudinal Ligament Of The Cervical Spine

Ossification of the posterior longitudinal ligament (OPLL) is a poorly understood condition most commonly seen in patients of Asian descent that can lead to compression of the cervical spinal cord and disabling progressive myelopathy. Because the abnormal bone formation essentially fuses the ligament and the dura into a solid sheet of bone anterior to the spinal cord, surgical decompression can be exceedingly challenging. This article describes the pathology, natural history, diagnosis, and management of cervical OPLL. 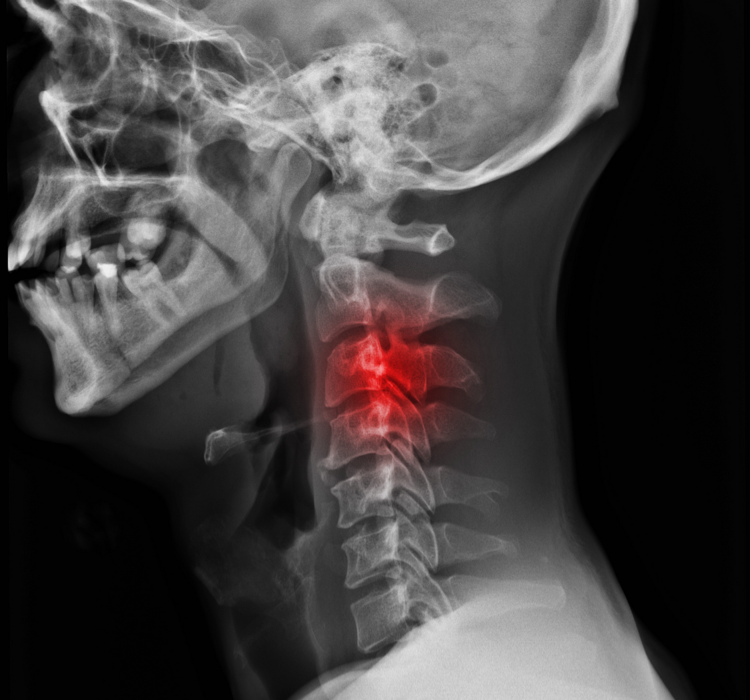 Multiple ligaments are responsible for maintaining the alignment and limiting excessive mobility of the cervical vertebral segments. One of these, the posterior longitudinal ligament, extends in a cranial-caudal fashion from the base of the skull down to the sacrum. It is located immediately behind the vertebral bodies and discs, attached to the annulus (perimeter) of each disc and wrapping around the base of each pedicle at each vertebral level. The ligament is anterior to and normally distinct from the dura, separated by the potential epidural space filled by veins and fat. The ligament functions to limit excessive flexion of the cervical spine.

For reasons not well understood (thought to be due to both genetic and environmental factors), in certain individuals, this ligament can undergo extensive abnormal (hypertrophic) bone formation that leads to progressive spinal cord compression and myelopathy. (Please refer to additional articles on Wascherspineinstitute.com for a more thorough description of cervical myelopathy). This is referred to as ossification of the posterior longitudinal ligament (OPLL). Because the ossification process often involves both the ligament and the adjacent dura concurrently, the dura can become incorporated into the resulting sheet of bone anterior to the spinal cord. This becomes particularly problematic for a surgeon, not only from a cord compression standpoint but also because resection of the offending calcified mass results in resection of the dura as well. The end result is a very high risk of cerebrospinal fluid (CSF) leak and fistula as well as iatrogenic (post-op)spinal cord injury.

Originally described in the Japanese population, where it affects approximately 4-5% of the population, OPLL is seen in approximately 1.5% of the U.S. population. It most commonly becomes symptomatic in those 40-70 years of age, presenting as progressive myelopathy. OPLL is more common in the cervical spine than either the thoracic or lumbar segments, although the entire spine may be involved. Presenting symptoms include progressive gait difficulty, coordination problems of the hands associated with burning upper extremity pain, as well as upper extremity radicular pain, weakness, and numbness. Diagnosis is based on MRI to determine the degree of cord compression as well as to identify the number of levels involved; CT of the cervical spine is indicated as well to confirm signal changes associated with the presence of the abnormal bone anterior to the cord as well as to determine the “occupation ratio.” (See below.)

Two forms of OPLL have been described: a continuous form (with a longitudinal sheet of bone extending behind the vertebral bodies, more likely to result in eventual myelopathy) and a segmental form with focal calcification primarily at the level of the disc spaces. In both forms, conservative management is initially indicated for those who present with radiographic evidence of the disease without overt myelopathy. However, these asymptomatic patients are more prone to spinal cord injury resulting from minimal falls. Unfortunately, if presenting symptoms show myelopathic features, progression is common and operative decompression is indicated. The occupation ratio refers to a measure on CT of the anterior-posterior distance of the spinal canal occupied by the abnormal bone divided by the expected normal anterior-posterior distance of the canal at this level. An occupational ratio of 30-60% predicts the development of myelopathy, while a ratio of greater than 60% requires immediate surgical decompression in almost all patients healthy enough to tolerate the surgery.

Surgical intervention includes consideration for anterior, posterior, or combined anterior-posterior decompression. It has been our preference, in severe cases, to first perform a multilevel anterior cervical corpectomy using structural radius allograft to fuse the affected levels associated with anterior cervical plating as a Stage I procedure. This is followed within a few days to weeks with cervical laminectomies with fusion and lateral mass/pedicle screw instrumentation at the affected levels to increase the chance for a solid fusion, recreate the normal posterior cervical tether, and avoid the development of post-operative kyphosis (abnormal backward curvature of the spine).

Posterior decompression alone is to be avoided in the presence of significant (> 15-20 degrees) cervical kyphosis. Laminaplasty (a procedure wherein the lamina is hinged laterally and opened like a door where it is secured in position; this allows for in situ enlargements of the spinal canal) is mentioned only to be avoided. It is associated with an unacceptably high rate of chronic pain, post operative C5 radiculopathy, and recurrent stenosis.

If you or a loved one has been diagnosed with a cervical myelopathy due to OPLL or any other cause and has questions, feel free to call us today at 1-855-854-9274 for a free MRI review. Second opinions are always available.

This case study illustrates the complexity of a patient with multi-level continuous cervical OPLL presenting with a progressively severe cervical myelopathy and a high occupation ratio requiring anterior-posterior surgery.

Primary Tumors Of The Cervical Spine