Primary Tumors Of The Cervical Spine

Although rare, primary tumors of the cervical spine must be considered in every patient that presents with cervical myeloradiculopathy. This article reviews the clinical and diagnostic features of tumors that arise within the spinal cord, the nerves, or their coverings. Cervical spinal cord astrocytomas, meningiomas, and nerve sheath tumors (schwannomas and neurofibromas) are discussed in detail. 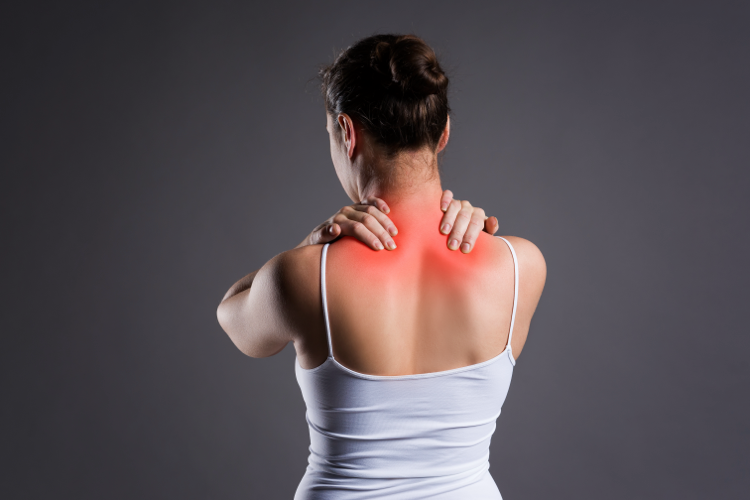 Primary tumors of the cervical spine are divided into two main groups based on the location of origin and their relationship to the dura (the membrane that surrounds the spinal cord and nerve roots):

Most intramedullary tumors are benign; only 2% are malignant. Tumors that are known as astrocytomas (also called gliomas) arise within the supporting cells of the spinal cord and cause signs and symptoms due to pressure on the adjacent nerve fibers. These include weakness, poorly localized pain, gait difficulty, and sensory loss that are not in the normal distribution of a nerve or nerve root, as well as bowel and bladder involvement. Diagnosis depends on enhanced MRI scan of the cervical spine; findings must be differentiated from transverse myelitis and acute inflammatory plaques of multiple sclerosis.

Treatment involves surgery via a cervical laminectomy to obtain a tissue diagnosis as well as to debulk the tumor as completely as possible. Tools such as the laser or the ultrasonic aspirator (a device which precisely fragments tissue and suctions it up at the same time) as well as careful microsurgical techniques are extremely valuable during tumor resection by minimizing trauma to the adjacent spinal cord fibers. Intra-operative monitoring of spinal cord function is essential during these surgeries. Benign lesions (other than astrocytomas) can often be completely resected when a reasonable plane separates the tumor from the spinal cord tissue; these include hemangioblastomas, ependymomas, and cavernous malformations (discussion of these entities is beyond the scope of this discussion). Early diagnosis leads to an earlier and more aggressive surgery, with improved outcomes. Preservation rather than restoration of function is the goal, as significant improvement in neurologic function occurs rarely after longstanding advanced pre-operative deficits. Immediately post-op, almost all patients experience some temporary sensory loss due to the requirement to split the fibers of the posterior spinal cord to achieve exposure to the tumor. Other post-op concerns are poor wound healing and cerebrospinal fluid leak. Follow-up MRI’s at 3-6 month intervals are indicated after surgery. Stereotactic spinal radiotherapy (SSR) is an option for recurrent tumors with progression of symptoms. Unfortunately, malignant primary intramedullary tumors have a poor prognosis.

Intradural extramedullary tumors (IET’s) affecting the cervical spinal cord primarily consist of meningiomas (75% of IET’s) and nerve sheath tumors(schwannomas and neurofibromas) (20% of IET’s). The overwhelming majority are benign. The remaining few percent are comprised of very rare lesions such as paragangliomas, hemangioblastomas, gangliogliomas, dermoids, epidermoids, lipomas, teratomas, granulomas, and “drop metastases” (arising from metastatic or primary tumors inside the head that have travelled down into the cervical spinal canal via the cerebrospinal fluid). IET’s produce no particular syndrome other than pain followed by progressive neurologic deficit; symptoms typically involve one nerve root(called “segmental” symptoms) and then become unilateral and finally bilateral as the entire spinal cord becomes involved. Brown-Sequard syndrome, characterized by ipsilateral weakness and numbness with contralateral loss of pain and temperature sensation, is commonly seen as the tumor progressively compresses one side of the spinal cord.

Cervical meningiomas arise from the dura and grow inward, compressing the spinal cord and nerve roots asymetrically. Most commonly seen in women in the 50-80 year old age group, these tumors are primarily located laterally at C4-C7 and anteriorly from the skull base to C2. The high cervical tumors can present with a distinct clinical appearance: headache, hand weakness and atrophy, and clumsiness due to early involvement of the anterior(motor) spinal cord. Multiple tumors are seen in 2% of patients, especially those with neurofibromatosis (a group of three inherited disease syndromes characterized by tumors affecting the brain, spinal cord, and peripheral nerves. Consideration for spinal angiography to allow for pre-operative embolization of very large, vascular meningiomas and those with dumbbell configuration (see below) has proven useful in our practice.

A schwannoma (also called neurolemomma) is a tumor derived from the supporting cells of a cervical nerve root within the dura that is usually separate from the nerve as an ovoid mass but tethered to it by a few nerve fibers. Neurofibromas are composed of a tangle of nerve fibers and connective tissue and present as fusiform enlargement of the nerve, less well defined compared to schwannomas. Both tumors can extend along the course of a cervical nerve out the foramen (the normal opening laterally between two adjacent cervical vertebrae), resulting in a so-called “dumbbell tumor.” Because dumbbell tumors are both inside and outside of the dura, they can be more difficult to resect. Only 1-2% of schwannomas and neurofibromas are malignant, again most commonly in those with neurofibromatosis.

Imaging of IET’s again involves contrasted MRI of the cervical spine. In all but the largest tumors, the surgical approach is via laminectomies with or without fusion and instrumentation depending on the extent of bone removal and the concern for post-operative kyphosis and instability. Unlike astrocytomas, the primary goal of surgical treatment of meningiomas and nerve sheath tumors is complete resection. Intraoperative neuromonitoring, laser, and ultrasonsic aspiration as well as microsurgical techniques are mainstays of surgery. Expected post-op neurologic deficits are less than 10% with modern surgical monitoring and techniques; in addition to usual concerns, post-op complications again include poor wound healing, meningeal inflammation, and cerebrospinal fluid leak. Even if a single dorsal nerve root is sacrificed to resect the tumor, permanent significant neurologic deficits rarely result. Again recovery is proportionate to the duration and the extent of pre-operative neurologic deficits. Gross total resection usually results in a cure, although, yearly post-op MRI’s are indicated to rule out recurrence. Recurrence rates are higher in patients with incompletely resected IET’s and those with neurofibromatosis. Recurrent tumors are preferentially treated with repeat surgery, or less commonly, stereotactic radiosurgery. (See the article dedicated to stereotactic radiosurgery elsewhere on Wacherspineinstitute.com)

In summary, early diagnosis, aggressive early treatment, and comprehensive long-term follow-up are necessary to achieve optimal outcomes for patients with primary tumors of the cervical spine. Surgery can be challenging and potentially high risk due to the direct involvement of the spinal cord-truly “high-priced real estate.” Make certain your surgeon has experience with these tumors before committing to surgery.

If you or a loved one has been diagnosed with a spinal cord tumor, call us today at 1-855-854-9274. We would be happy to provide you with a free MRI review. Second opinions are always available.

Ossification Of The Posterior Longitudinal Ligament Of The Cervical Spine